Panagiotis Agrios was born in Athens, in 1975. Ηe trained in sports from a very young age, starting with boxing while his introduction to the world of martial arts started with judo, at the age of 17. As member of the sports club “Panellinios”, he studied under Athanassios Kaparos.

He holds a 5th Dan in the art of Aikido which he teaches professionally at the Athens Bushido Center and in other dojos he collaborates with. Moreover, he practices the oldest form of Japanese swordmanship, Tenshin Shoden Katori Shinto Ryu.

George Alessios was born in 1975. He was first acquainted with the world of sports through Greco-roman wrestling and freestyle wrestling, which he practiced from 1984 to 1986. Following, he studied other martial arts and in the end, he chose Aikido.

Since 2004, he has been systematically training in the art of Aikido, where he holds the 3rd Dan. At the same time, he also trained in the art of Judo, next to Athanassios Kaparos Sensei and he has received the rank of 1st Dan.

He currently trains in Athens Bushido Center and teaches at Shuren Dojo. 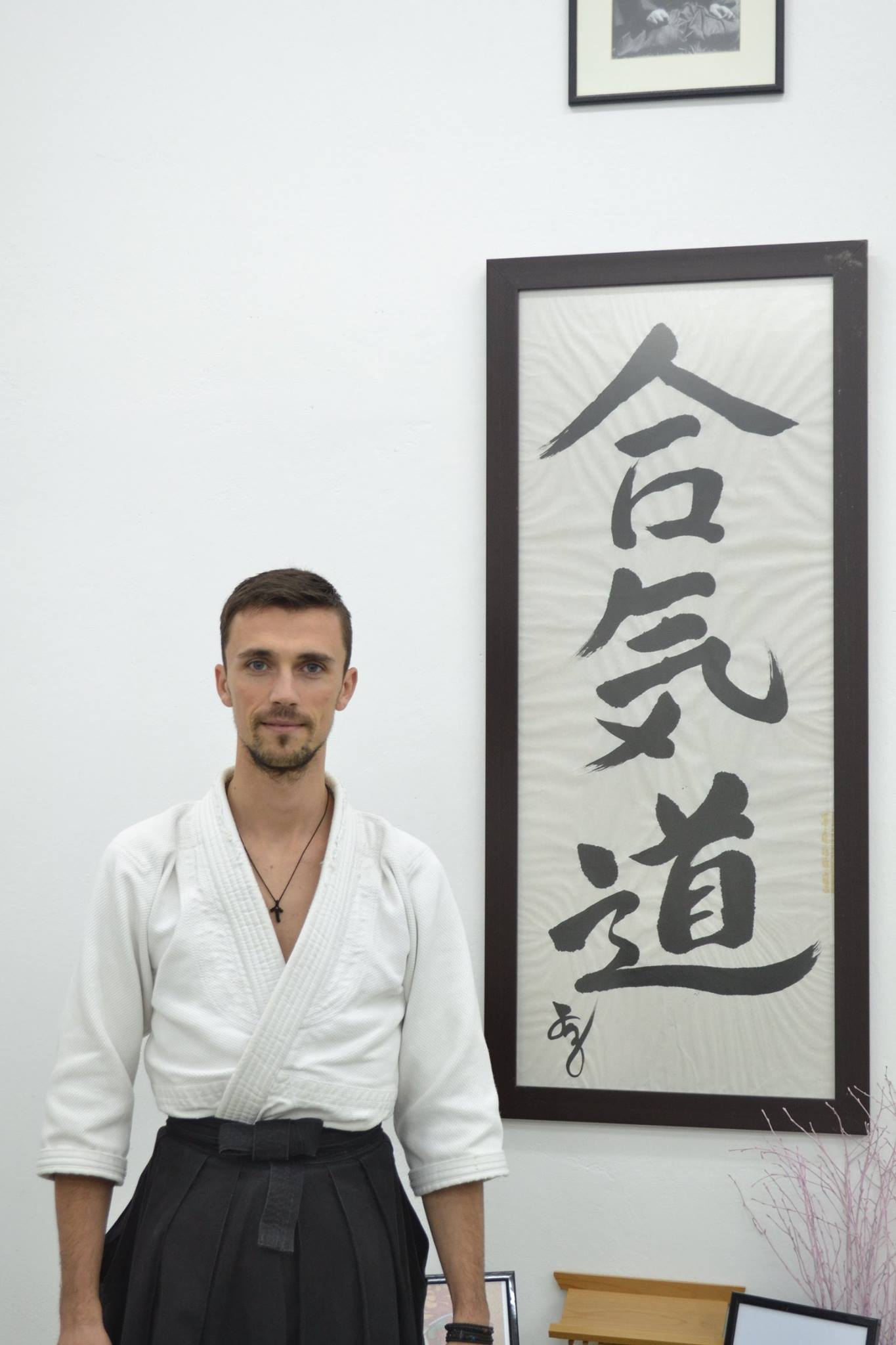 Raphael Prifti was born in 1989. He developed an interest in martial arts from a very young age. He has been practicing Aikido for the past 7 years, as it is the art which won him over so next to Panagiotis Agrios Sensei he reached the rank of Nidan (2nd Dan) Aikikai.

He has also received the title of Fukushidoin, a rank certifying that he can act as an assistant instructor, on an international level and teach at UAD dojos. In addition, he has been training in the Japanese art of swordmanship, Tenshin Shoden Katori Shinto Ryu. 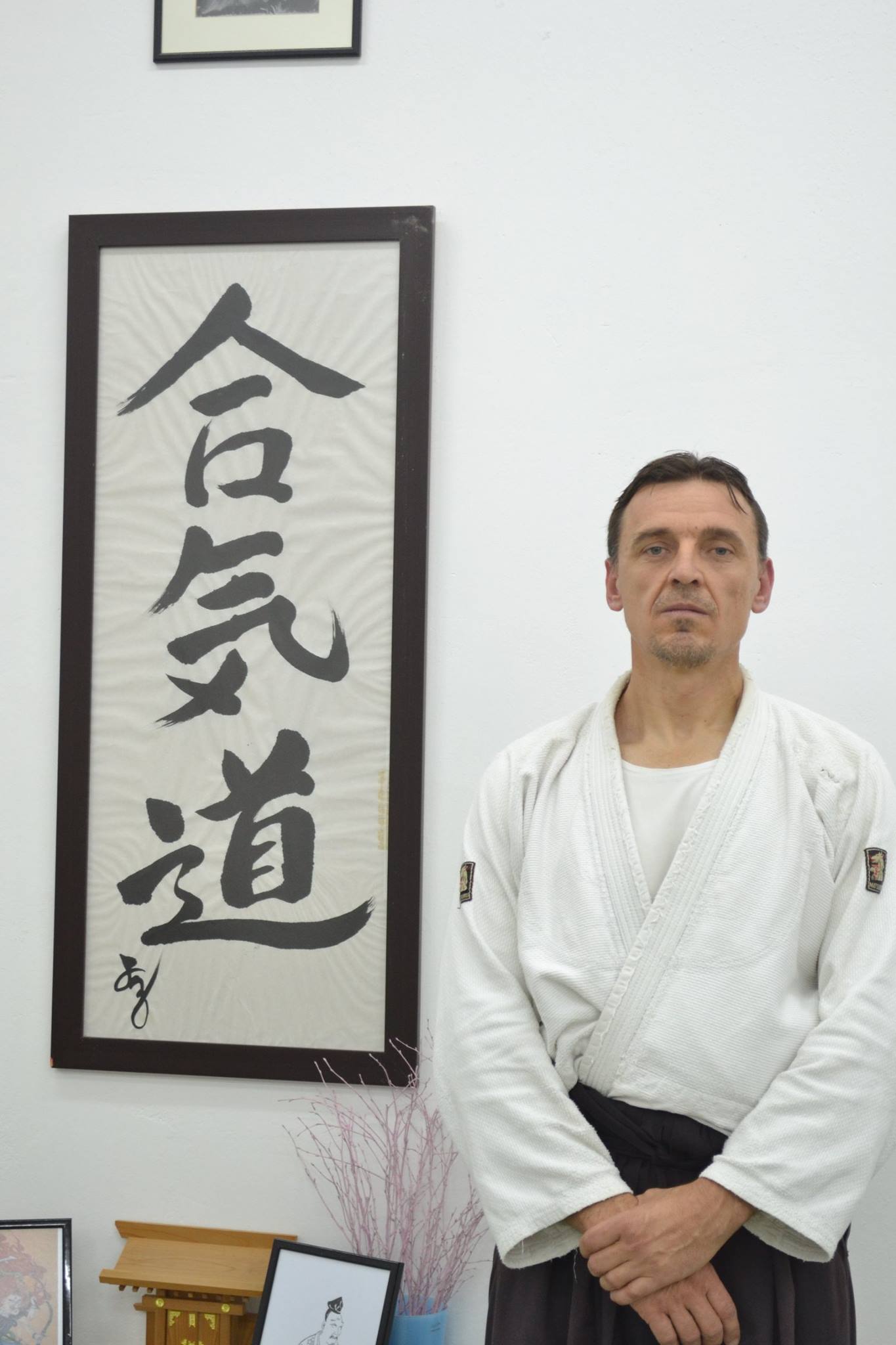 He was born in 1973 and was soon interested in various sports activities such as football, gym training, basketball and ping-pong. However, he was won over by the art of Aikido.He has been training in Aikido for 7 years, next to Panos Agrios with whom he collaborated in order to teach Aikido to the female inmates of the Thiva penitentiary facilities, within the framework of the respective volunteering program organised by KETHEA, the Therapy Center for Dependent Individuals.John has a black belt and received the rank of 2nd Dan (Nidan) Aikikai while training in Katori shinto ryu as well. 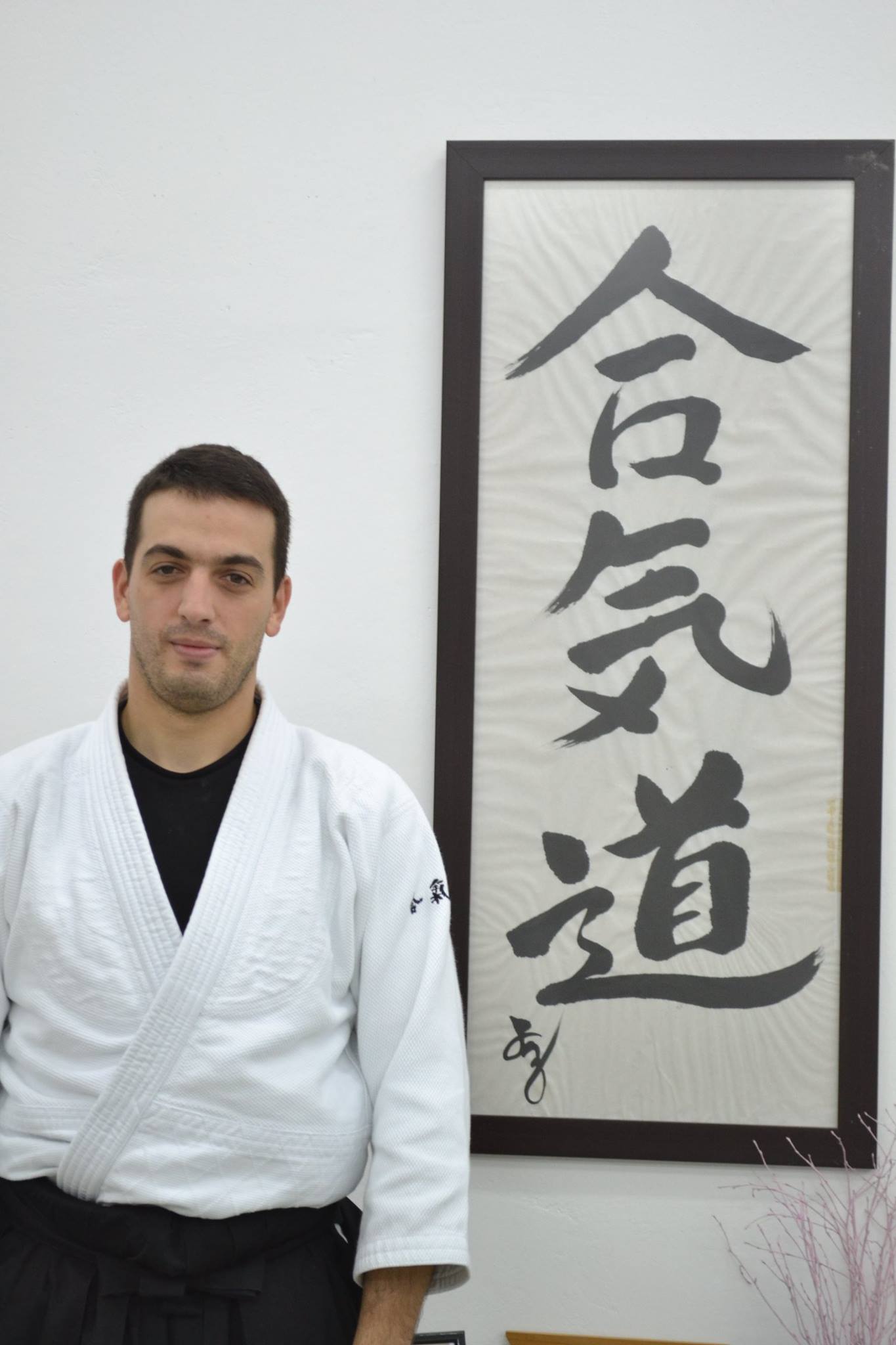 From a very young age, Dimitris was particularly keen on sports, especially track and field sports. He was first introduced in martial arts, later on in his life, when in 2007, at age 25 and as a PhD student, by Stelios Kotsios, Associate Professor in the School of Economic and Political Sciences, who used to teach Aikido at the Athens University gym. From the very first moment he set his foot on the tatami, he loved this art which has been ever since a way of life for him. In 2011, he visited Panagiotis Agrios Sensei’s dojo (Athens Bushido Center – ABC) where he has been training systematically since then. While at ABC dojo, he received the title of Fukushidoin and in May 2015, the rank of Shodan. The past few years, Panagiotis Agrios Sensei has offered Dimitris the rare opportunity to accompany him as jyoshu during his national and international seminars but also in other dojos where he teaches, apart from ABC. 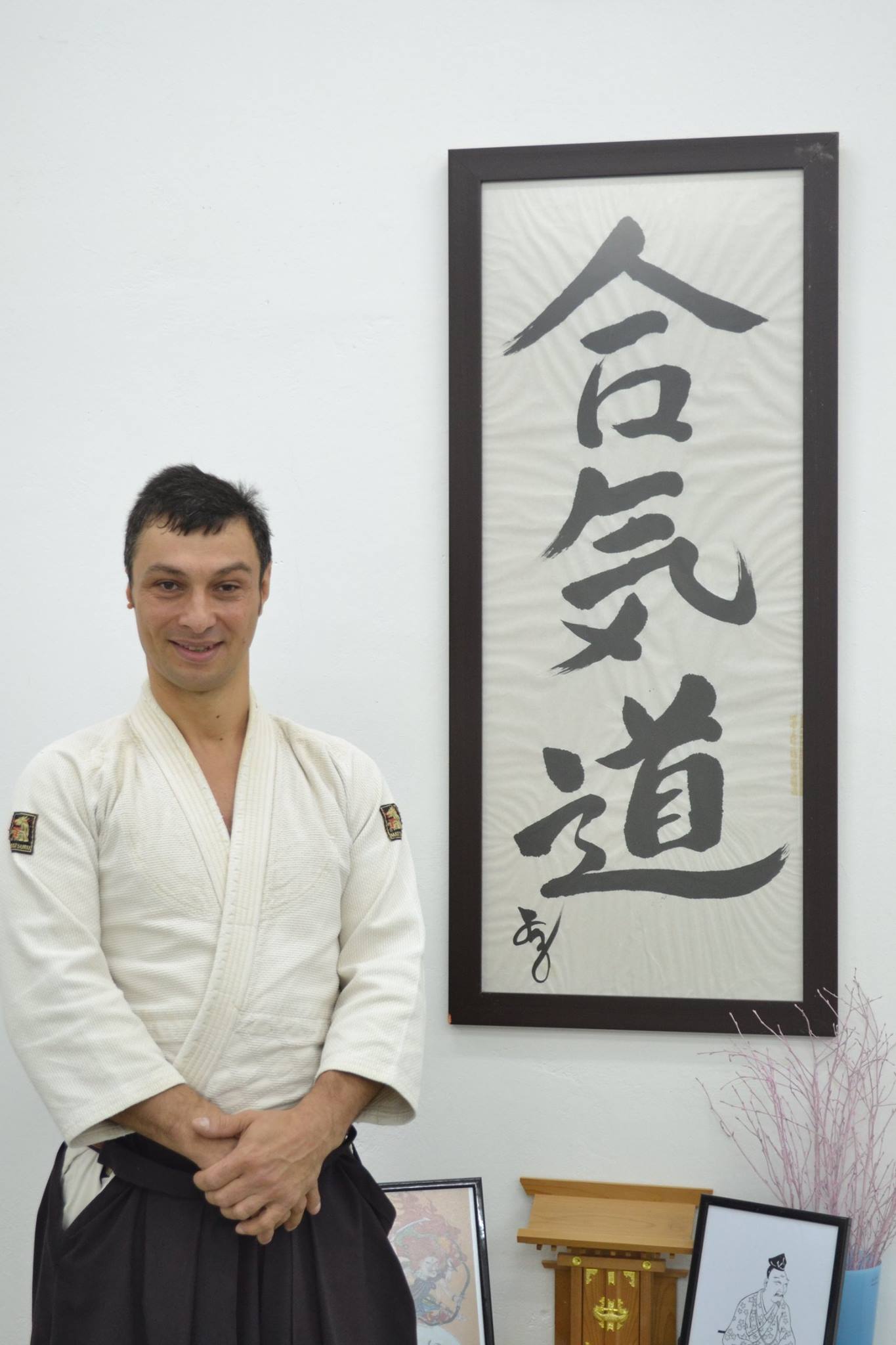 Ion Florea Manica was born in 1975. Judo was the first martial art he ever practiced; he was later introduced to aikido and the first time was enough for him to understand that aikido was different compared to any other martial art he had tried thus far, so he decided to pursue it.

Within the 5 years that followed, due to the intensive practice at Athens Bushido Center he successfully passed the exams to receive a black belt and the rank of Shodan (1st Dan). On the same, he also successfully graduated the instructors’ school and became a Fukushidoin. Ever since, he keeps practicing at Athens Bushido Center while contributing in the development of aikido. 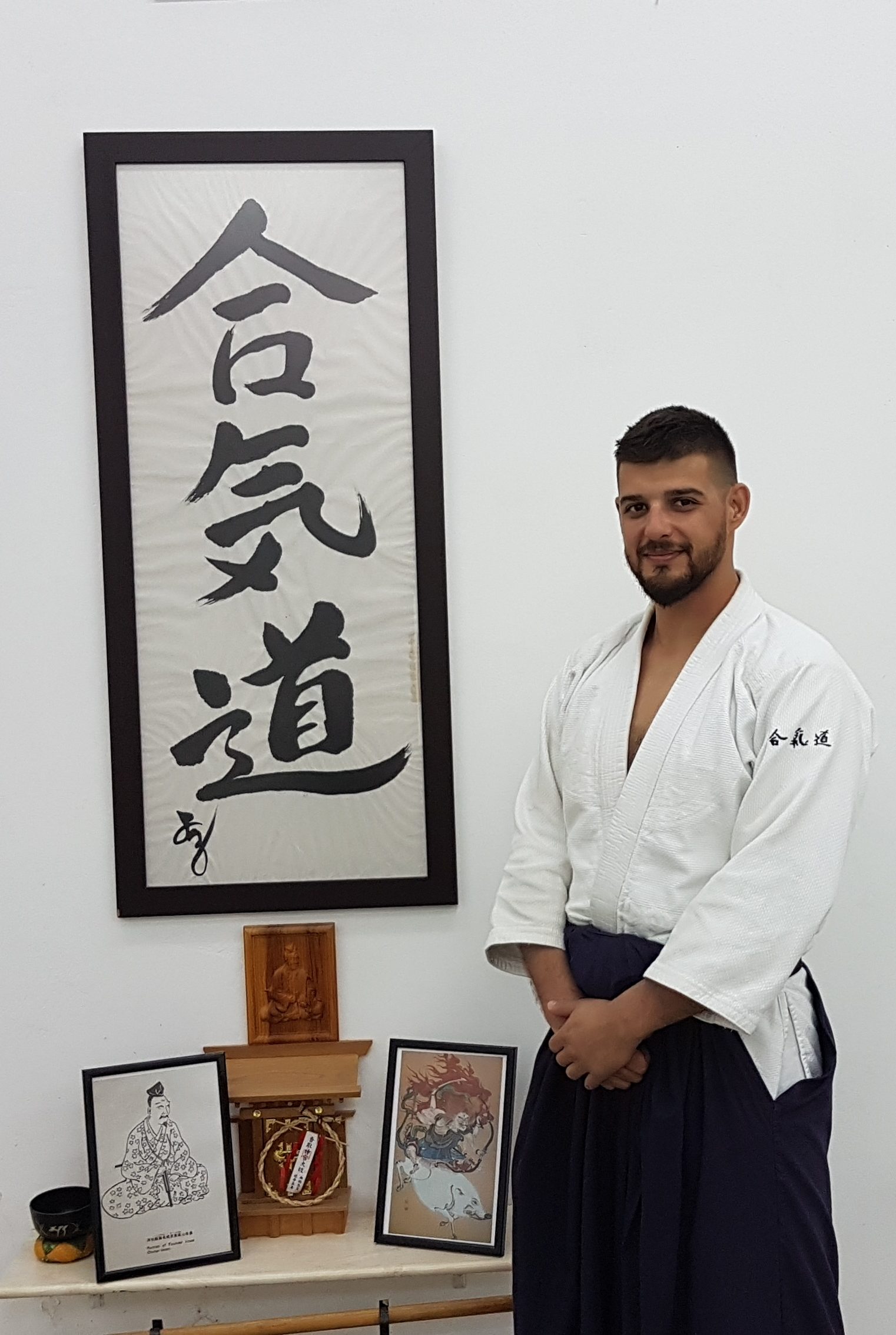 Born in 1989, Halaris Constantinos has been involved in various sports, including basketball, swimming and polo. His first contact with the martial arts field was with Aikido where he immediately saw in it a fine art with a wide range of possibilities. He has been involved with Aikido for the last 6 years, and has reached the rank of Sodan (1st Dan) Aikikai.

George Kanellopoulos was born in 1975. For the last 6 years he has been dealing with that at the Athens bushido center. In 2019, after examinations, the 1st Dan aikikai was awarded.